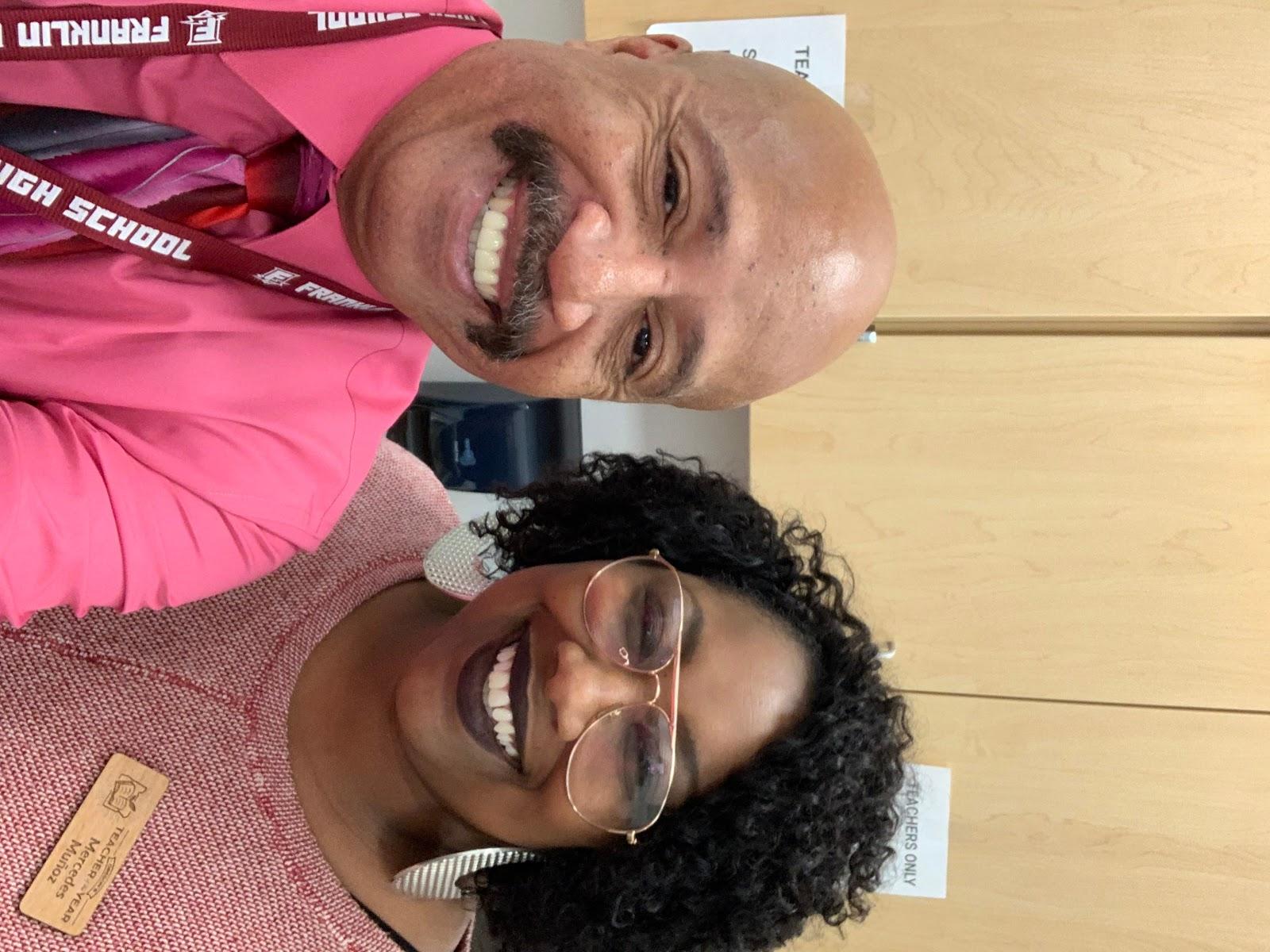 Mr. McClendon in his 2nd year of teaching. 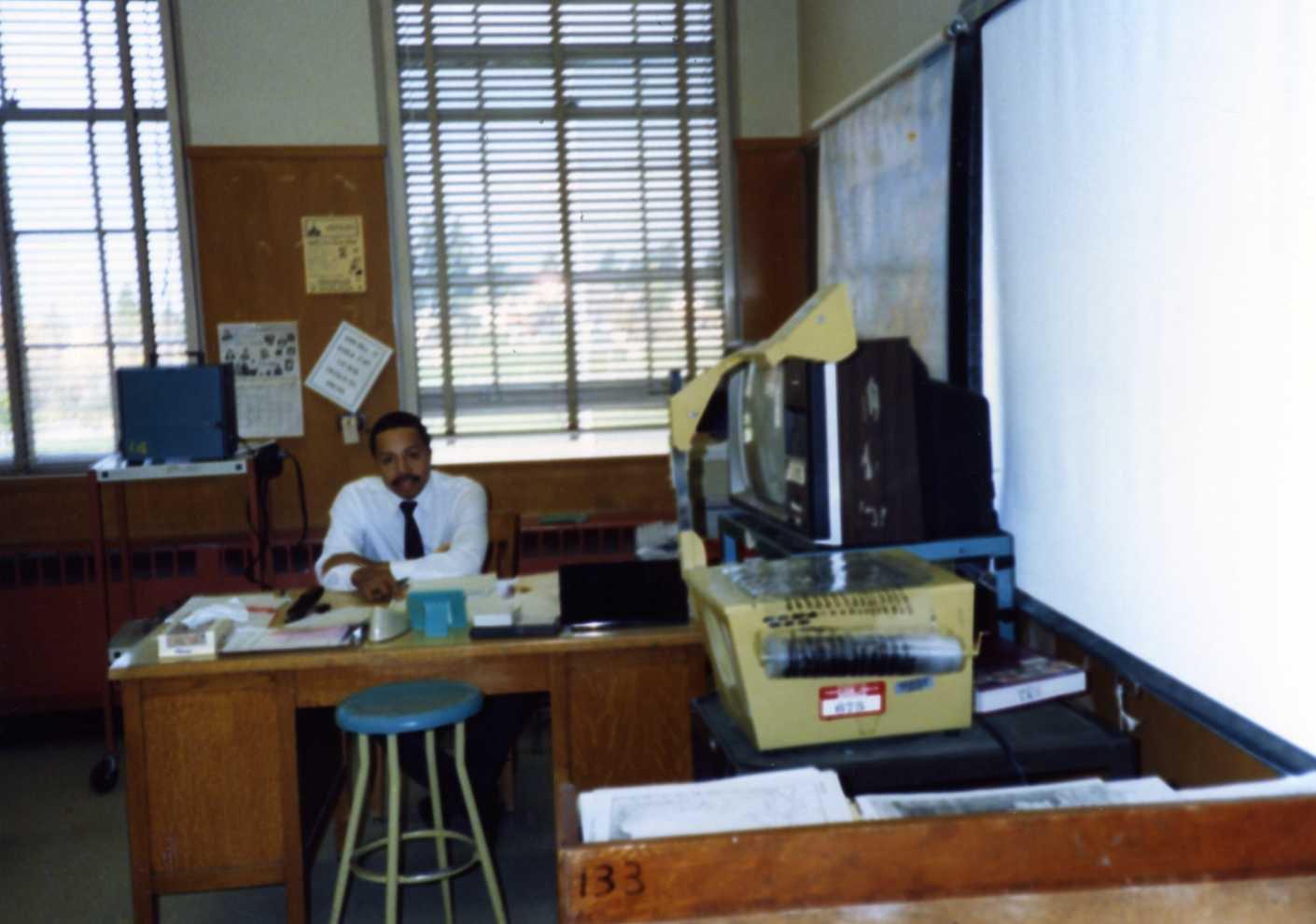 Mr McClendon with 2020 Teacher of the Year, Mercedes Muñoz.

As the 2019-20 school year comes to an end, the Franklin community is saying goodbye to not only the Class of 2020 but also to William McClendon, a social studies teacher who will be retiring after 30 years at Franklin. Mr. McClendon is a favorite among many students for his engaging and anecdotal lecture style. Mira Kron (11) who has had McClendon for all three years of high school says, “he’s one of the best teachers I’ve ever had. One thing I really appreciate about his classes is that he always makes the content interesting and meaningful. I don’t think I’ve ever been bored in his class!” In reference to his teaching method, McClendon explains, “I believe in the power of storytelling as a teaching strategy. It makes subjects more interesting as well as more memorable. Anyone who has taken my class will tell you that I tell lots of stories relevant to the concepts I’m teaching. A student might forget some of the details, but a relatable story means that the concept is absorbed and remembered for a long time.”

McClendon joined the Franklin staff in the 1989-90 school year, initially teaching Gov/Econ and Global Studies, which is now referred to as Modern World History. McClendon was inspired to begin teaching because of his grandfather who was a college professor, and because of his pursuit of an advanced degree in Adolescent Psychology. Reflecting back on his thirty years at FHS, McClendon says he’s noticed many changes in his students over time. However, the most notable shift for him hasn’t been the fashion or the technology but greater levels of student anxiety. “It seems that students are struggling more profoundly with their fears. Fears around academic performance and social acceptance. The world has changed since 1989 and students have changed with it.” McClendon discusses stress and anxiety with his AP Psychology students, and also serves as the staff mentor for the student-run Mental Health Advocacy Club. Kron, who is the vice president of the club in addition to being a student of McClendon, adds, “Besides being a great teacher, Mr. McClendon is also extremely compassionate and clearly cares about all of his students. He’s always made me feel supported and listened to, and has a [high] level of respect for his students.”

Over the years, McClendon has taught a wide variety of social studies classes at Franklin including African-American History and Intro to Law, among other things. He’s finishing off his final year teaching AP United States History and AP Psychology. McClendon did not anticipate finishing his teaching career virtually and says, “It’s been weird. Not being able to truly connect with all of my students in the virtual world is a real challenge. I feel the relationship aspect of teaching and learning has been negatively impacted and I think that’s one of the most important factors in education.” After the pandemic has subsided, McClendon hopes to use his retirement to travel more often. He also looks forward to spending time with his growing family including his five grandchildren and soon-to-be wife. He also plans to continue his hobbies of gardening and playing video games. Nevertheless, McClendon says he “will miss the happiness I feel watching ‘the lights go on’. I love the look on a student’s face when that student has made a connection to a concept I’m teaching. I’ll miss the relationships. I’ll miss the smiles and the laughs too.” Mr. McClendon will leave an impactful legacy on the large number of students and staff members he has worked with throughout his time at Franklin. He is a charismatic, engaging educator, and a voice of support for any student who enters his classroom.